Around a live conductor there is a magnetic field whose intensity is proportional to the intensity of the current through the conductor. If an alternating current is now passed through a coil-shaped conductor, which is called an inductor – and in practice also a work coil -, an alternating field is set up in that coil (and also around it). If a piece of metal is placed in this field, the field generates in the metal an electric tension or voltage which causes a current to flow. 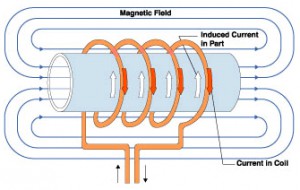 The direction of the current generated is such that the magnetic field associated with this current tends to keep the original field constant (Lenz’s law). The electrical energy converted into heat in the metal (e.g. a work piece) is determined by the relation  Ø = I2R, where Ø  is the electrical power in watts, I the current in amperes and R the resistance in ohms of the work piece. This resistance is not the quantity as it would be from a direct-current (resistance) measurement but the resistance to high-frequency alternating current which depends not only on the resistivity of the material but also on the frequency of the alternating current (see also “the skin effect”) and the relative permeability of the material to be heated.Since the hysteresis losses are proportional to the frequency and the eddy-current losses increase proportionally with the square of the frequency, the eddy-current losses can be expected to exceed the hysteresis losses substantial at high frequencies. Hysteresis losses occur only up to the Curie point, because above that temperature the permeability, which is very high when the material is cold, becomes unity and the material losses its magnetic properties.

Induction also occurs with a conductive component, in which there is a change in current. This is because around the component a changing magnetic field occurs caused by the changing current itself. This induction is manifested as a voltage that opposes the cause of the change of the current. This is called self-induction. In the electrical engineering a coil is used as a self-inductance. Mostly a coil consists of multiple turns (also single turn is possible) through which the same current flows, and which conclude the same magnetic flux. The self-inductance of a coil is proportional to the square of the number of turns.

where L is the inductance is (in henry), I is the current, and represents the derivative with respect to time.

We're not around right now. But you can send us an email and we'll get back to you, asap.